Nine weeks today (Jeez, only nine?) I will (hopefully) be nearing the end of 110km of running, basking in the satisfaction of completing my first ever Ultra. If I was feeling supremely optimistic, in nine weeks I may be already finished, given that the race clock would now be showing 18 hours 15 minutes! However, given that I am sat here with a bottle of beer and a quite heavily strapped ankle, my optimism is slightly dialled down at the moment. Why the strapping? Read on…

Easter holidays for the Morgan-Hillams means our annual family ski holiday to Saas Fee, Switzerland. At 1800m above sea level, perfect skiing is guaranteed on the glacier and perfect, sunny, blue sky days can also be pretty much guaranteed. What can also be guaranteed is excessive beer and pizza consumption! Not, then, ideal conditions for a budding Ultra runner.

I had factored this week into my training plan as a last ‘easy’ week before a full on heavy-mileage assault on the last half of April and May. However, I wasn’t going to totally rest the entire week – at the very least I would spend it at altitude, lugging two lots of kiddie ski equipment across nursery slopes, hoiking my youngest up slopes and on and off drag lifts, and dragging Mrs Sticks down ski runs that she would rather view from the sun terrace!

But my running kit was also packed, as it had been the previous year. As we drive to the Alps, I intended to have my annual early-morning-hangover run along the Doubs river in the French city of Besançon, our usual en-route sleepover destination. But, for the first time, I also packed my full trail running kit – the tentative idea being to find a suitable mountain trail to run up; if I found the time or the guts!

Last year I had felt quite the explorer simply running round the village for a couple of laps. I think it was more embarrassment at the quizzical looks of the apres-skiers (of which I am usually one) that made me feel so self-conscious. This year, inspired by Paul, a friend who lives in Kitzbuhel, Austria, who is forever uploading training run pictures onto Strava of his snow-covered, tree-lined, blue sky mountain training runs, I intended to take it up a notch!

After checking the local maps and studying Google earth, a suitable route was found and, taking advantage of the fact that it wasn’t going dark until after 8pm, I was able to drop the family at their ski school disco and get back to the chalet for my run. I was going to take on 7 hairpins from the end of the village to the gondola station at Hannig. I reckoned on it being about 2.5 miles up so figured, if it went well, I might do it twice. (My naivety really does have no bounds sometimes!)

So at 5pm, after a little loop around the top of the village to warm-up, I left the comforts of tarmac behind and hit the trail. Conditions underfoot were a mixture of snow and trail and I loved it from the get-go. The only moments of self-doubt came when, at the 2nd hairpin, I realised I had underestimated the distance of the route – I had run nearly 2 miles already and still had 5 corners to complete! The higher I went, the deeper the snow became and, as the sun had long since left this side of the valley, the surface became crisper, meaning the foot broke the surface and sank into soft snow with each step. This made running tricky and greatly increased the effort but I doubt it can be possible to do better training. Altitude, 4 miles of non stop climbing, draining conditions underfoot, continuously sensational views – no wonder Paul from Kitz blazes round City marathons at the speed he does! 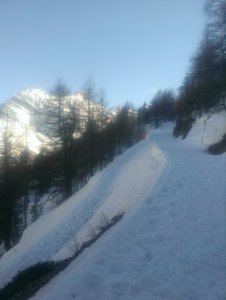 On the Alpine trail, Saas Fee, Switzerland. Tricky and tiring underfoot but, with views like that, who cares?!

After just under an hour of running (although that did include at least 10 photo stops!) I reached the gondola station and was rewarded with a stunning view of the village 500 metres directly below. The sun cast its last lingering rays onto the snow-capped mountains opposite, in front of a sky so blue that it could have been painted by an over-enthusiastic infant. I had the mountain to myself, I could hear the apres bars below and I could practically make out the restaurant that the girls would be guzzling pizza in at that very moment. The sense of adventure, mixed with satisfaction of achievement, made this probably the highlight of my running career – certainly my training career at the very least! I admit to having a little moment stood there, looking down at the sheer wonder of the world, thinking how lucky I was that I could experience it.

Looking down on Saas Fee village 500 metres below. Best running view ever.

Yes, the zen-like, man-tear moment passed rather quickly and was suddenly replaced by a desire to get back down, rather quickly, to civilization and the safety of beer and pizza and families and not Wolves. (That’s the animal, not the City, although they both fill me with equal dread.)

The underfoot conditions, which made ascending so difficult, made descending an absolute joy. Indeed, it was not entirely unlike skiing as I could fling myself at the slope with wild abandon, knowing that each foot-strike would be greeted with the crunch of freezing crust and the safe planting of the foot in the soft snow underneath. The descent took less than 28 minutes and was as thrilling as the ascent. (I was extremely quick – did I mention I thought there might be Wolves?)

Unfortunately, all good things must come to an end and so, in the blink of an eye, we found ourselves back in Blighty. Another week off school meant I could get back on the running horse mileage-wise, although I wasn’t going to overdo it as I had the second Lakeland Trails race of the season on the Saturday, so wanted to at least conserve a little bit of race pace.

If you read my last blog (if not, go and read it right now – immediately. I insist.) you will know all about the excellent Lakeland Trails events and you will also remember that I made a bit of a horlicks of the first Lakeland Trails race, setting off like an elite runner and finishing like a geriatric. I was determined not to make that mistake again.

But first I had the joys of supporting Mrs Sticks as she ran her debut trail race in the morning over a 10k route (Ha! A very approximate 10k which, unless everybody’s GPS watches are faulty, was a generous 12k or so!) I was far more nervous for her race than my own; so desperate was I for her to enjoy her first trail experience. So I was both proud, delighted, and a little relieved, to see her enter the finishing field with a huge smile – even if that huge smile was accompanied by a grazed and soon-to-be very bruised elbow from her first trail tumble!

The kids ran next, chasing the budget-costumed Jerry Giraffe around the field to great cheers!

Finally, I was off. See my last post for route details but, you can be assured, I set off at a far more sensible pace than last time, ready to attack the infamous ‘Coffin Trail’ climb in the last 2/3 miles.

It is amazing what a funny thing pace is, especially on hilly trails. It felt as if the slower I ran, the faster I got. At the top of the first climb I had deliberately paced myself not to get out of breath, and yet here I was beginning to overtake the field in front as we rolled towards Far Sawrey, above Windermere.

Scenery to match Switzerland! Langdale Fells in the background. All smiles approaching the top 20 and Far Sawrey – mostly because I have no idea what is about to happen…

I was feeling great and began planning an assault on a top 30 finish. We crested the ridge summit to begin the steep descent to Windermere. “19th.” I thought I heard the Marshall shout to the runner I was about to overtake. “20th.” 20th? Really? Well this is going well, I thought to myself, whilst looking for a spot to effect my next overtake as the path pitched steeply downhill.

It is amazing sometimes what a difference 5 seconds can make. As quickly as you have just read that last paragraph, I went from “Blimey, I am feeling great!” to “Ouch.” I went over on my ankle very quickly and recovered immediately. These things happen two or three times in every trail race, usually followed by a few steps of panic and then a “Phew, that was close!” This time, however, I knew I hadn’t got away with it. Steeply descending wasn’t helping either. After a few steps I knew this wasn’t a pain that was going to subside and I was reduced to hobbling and hopping down the steep path.

Whilst it was disappointing that my race on the day was in ruins, I was obviously far more concerned with the bigger picture and not doing any long-term damage. Once the descent bottomed out on the shores of Windermere, I knew I had a mile or so along the lakeside, before the Coffin climb and the final descent. I assumed that I wouldn’t be getting a lift back to the finish area if I did drop out, so I simply took it very easy and decided to get back without inflicting further damage. This wasn’t as bad as it sounds, although it has to be said the final, mile-long descent to Hawkshead was a very painful and generally unpleasant experience, especially on such a beautiful day and in such beautiful surroundings. I was actually quite pleasantly surprised that I still managed to complete the 10 miles in 1 hr 25 mins and in 52nd place, despite hobbling and hopping the last 5 miles or so!

And so now you are up-to-date. A week later the ankle is sore but definitely better than a week ago, I am determined to man-up and do some core training this week while I can’t run, and just maybe by next weekend I can get some cross training in and hopefully not lose too much valuable training time. I really need to be putting the miles in over the next 6 weeks but am very conscious of remaining patient and not making the injury worse.

Instead of a morning run, I will sit in front of the box and subliminally cheer on the London marathon runners, hoping they achieve their personal goals and generally have one of those magical running experiences. One that will live in the memory forever. Like I had up a mountain in Switzerland.