However, at this very moment, somewhere near Walton-on-Trent in Derbyshire, hardly souls will be entering the last 3 hours of the Conti Lightning Run, a continuous 12 hour race set on a roughly 10k trail course. Today, conditions are pretty wet underfoot and the weather, while improving, has not been dry.

My first (and probably last) ever published article. (Men’s running magazine.) As yet, this has not made me enough money to retire from teaching. Still, we live in hope… (If you are reading this and feel like employing a full-time writer to attend races around the globe and write reviews, please do contact me.)

Boxing Day. I’m sat reading my Christmas edition of Men’s Running in the only room in the house where a bloke can get some peace and quiet on Boxing day. (I bet you read yours there too, don’t you?)
The page drops open as if by magic on an advertisement for the Conti Lightning Run. Or, more specifically, on a request from our esteemed Editor for potential members of a Men’s Running Conti Lightning Team. No point entering that though, eh? They must get thousands of applicants. Still, all you have to do is send off an e-mail. No harm done. So I reach down for the I-pad (Yes, still on the toilet – stop judging me) and fire off a mail which I hope may stand out from the crowd.
Fast forward to March. As I zip through my inbox deleting the copious junk we all have to deal with, I suddenly land on the name of David Castle. Hang on, I know him… “Mark, if you are still available, and fit, we would like you to be part of the Men’s Running Conti Lightning Run team.” I literally jumped off the toilet in excitement! (Yes, yes, there are other rooms in my house.)
Immediate excitement about the event and the potential for free kit was soon replaced by fear and dread: what if the rest of the team are loads faster than me? What if I pick up a stupid injury on a meaningless training run? What if the wireless isn’t strong enough to reach the downstairs bathroom?
The next two months fly by in a blur of extra training runs and, before I know it, we are assembled at the pre-race briefing at 5.40am on Sunday 4th May.
The Conti Lightning Run is a 12 hour race over a country 10km course in the grounds of Catton Park, near Burton-on-Trent. Individual entrants mingle with pairs teams or relay teams of 5 runners. Here is what I knew about my Men’s Running teammates:
Euan McGrath – ultra runner, UTMB finisher, coach, a 30-miles-before-breakfast type of guy. Sub 36min 10k runner. FAST.
Jonny Muir – ex-journalist, teacher, Author, bloody good sub 34 min 10k runner. VERY FAST.
Pedro Upton – a one man running success story. 19 stone 12 months ago, now running 37.30 for 10ks. FAST.
Euan Mathieson – a bit of a man of mystery, don’t know his running background. But he’s in the Army, so he’s going to be knocking out 40min 10ks carrying a full pack, surely?! HERO. STRONG.
Me (Mark Morgan-Hillam) – primary school teacher, just turned 41, very pleased with finally ducking under 40 mins for 10k for the first time last year. MEDIUM PACED. NERVOUS.
6am – we’re off. Pedro’s up first as it was practically impossible to keep him caged any longer, such was his enthusiasm. 39 minutes later, he’s back with us in 2nd place; Army Euan is out next and returns looking strong with us still in 2nd place.
My turn next and finally, after all the anticipation, I’m out on course. The first half of the course is predominantly uphill with a substantial section of woodland weaving; the second half is predominantly downhill mostly on farm tracks. I’m pretty happy with breaking 41 mins as I hand on to Jonny two minutes behind the leading team.
Saving Jonny and Euan Mc for legs 4 and 5 was clearly a tactical masterstroke as they both whip round in under 39 minutes to put us in the lead by 11 minutes after the first 5 laps, (one for each runner on the respective teams.)
And so the day continued; I had thought it would be a lazy day of hard running followed by rest and re-couperation between runs. But far from it, I found myself constantly clock watching to ensure I was there to cheer teammates into the finish, offer encouragement where required, to cheer on the Women’s Running team who were also running well, and also to check on opposition times to keep an eye on our ever increasing lead.
As a team we managed to avoid all the pitfalls that can derail a team in an event such as this; no injuries, we stuck to our pre-race strategy, all of us managed to maintain lap times at our level without any major drop –off in performance and, probably most importantly, we didn’t suffer the one catastrophic lap which can blow your hopes out of the window in one go.
As we entered the last hour it finally dawned on us that we were going to win. Army Euan went out at 5.03pm and the only question was whether he would return in time to allow me a 4th lap (my heart was way more enthusiastic about this than my legs!) Euan returned with an extra spring in his step in plenty of time and off I went on what amounted to a victory lap of honour for the team.
With the pressure off and the course practically empty, I enjoyed one of those magical runs where you remember why you put your trainers on in the first place. This will undoubtedly be the only time I will ever get to genuinely ‘win’ a race and the bond I felt with my teammates, who I didn’t even know the day before, was immeasurable.
We made sure that the whole team were there to join me as I descended into the start/finish area for the last time and we crossed the finish line together – a lovely moment to cap a magical day.
Thanks to Men’s Running for the opportunity, congratulations to the Women’s Running team who finished a well deserved 3rd in their category, thanks to Felix from Continental and Adidas for the kit, thanks to the Catton Park team for setting up the course so well and, finally, thanks to my teammates for the support, advice and laughs! 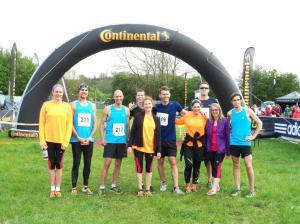 I do need to add a footnote to this article, as I promised to tell you how I met Laraine Wyn-Jones, herself a brilliant blogger and part inspiration for me getting round to blogging myself.

After the above race was over, many competitors packed up and left. I could have done the same, as my in-laws live in nearby Wolverhampton and, indeed, Mrs Sticks and the kids were heading back there themselves after supporting me. However, I decided I wanted to soak up a bit more post-race atmos, plus my new mate Pedro and his good lady were lighting a BBQ, so I decided to camp the next night too and make some inroads into the crate of beer in my cool box by way of celebration.

After a quick shower and pooling of anything edible from the remains of team Men’s Running, camping chairs were opened, feet were raised and the first beer was cracked open. It was at this point that we realised one of the Women’s Running team  were having trouble starting their car.  A breakdown guy arrived to do whatever he needed to do to get her moving.

Next thing we know, we hear an engine rev, followed very quickly by crunching and ripping noises, followed even more quickly by screams. We all jumped up to be confronted by the horrifying scene of the car (Laraine’s, obviously) now parked on top of, and partially inside, a tent. Fortunately, it was quickly established that no-one was inside the tent – and I mean fortunately as the car ended up on top of a sleeping pod. The only injury sustained seemed to be to the breakdown guy who had managed to brake his arm in the action of doing whatever he was doing. Obviously though, there were a lot of shocked people around, not least the tent owners who were moments away from turning in for the night. Thank goodness they didn’t, as the car had come to rest on their bed.

To cut a long story short, medics were called out for the breakdown guy and, as Laraine lived in Telford at the time, I drove her home before spending the night in comfort at my in-laws. I never did get the celebratory beer, and I can only assume Pedro ate all the sausages and burgers!

Laraine doesn’t live in Telford anymore. Check out her amazing new life and planned adventures at;

Jonny’s blog is also amazing – proper pro. Find it at:

Get his books too, they’re great. (I will get round to reviewing them here one day.)

Euan McGrath is my Ultra-Hero! We will meet again in 8 weeks as he is also participating in the Lakeland Trails Ultimate Trails 110k event. (I suspect he will be well in front of me though!)

Finally, Pedro! An inspiration to all. Follow his never-ending running and obstacle race expoits on Twitter at:

Please leave comments below! I apologise for not getting back to the kind people who have left messages about previous posts – as I didn’t add the e-mail box in I couldn’t reply! (I’m still a blogging-amateur!)