Last Saturday (21st March) saw the return of the new Lakeland Trails season. A series close to my heart for at least 2 reasons: firstly, it was the series in which I made my ‘proper’ trail debut just two years ago and, secondly, they are also the hosts for my up-and-coming ultra debut in June this year competing in their Ultimate Trails 110km race.

(nb – I’m not a ‘facebooker’, but look them up on there, it’s the most up-to-date source of information.)

I am no expert in this field, and I am certainly biased, but I do think that if you have ever fancied dipping your toe into off-road racing but were nervous or apprehensive about doing so, there simply cannot be a better event to try out than any of the Lakeland Trail events.

There are 3 Spring races (Cartmel, Hawkshead, Staveley) and 4 Autumn races (Keswick, Coniston and a Helvellyn/Ullswater double-header). Added to these is a summer marathon/half marathon and, this year, for only the second time, the 55k/110k Ultra event and you have yourself a recipe for a great trail running year!

The Spring and Autumn races follow the same format: 10k in the morning, kids races at lunchtime, 15-17k race in the afternoon with the option to start an hour earlier than the main race if you fancy a more leisurely pace. All the above means that, whatever your ambitions and abilities, there is a race for you. Throw in the family friendly atmosphere, the soothing tones of resident Lakeland Trails singer/songwriter Pete Lashley and you have a winner of a day out!

Unfortunately, I have never been able to participate in any of the Autumn races due to other race or family commitments (I know the routes of these races well; they would be great!) but I am in my 3rd year of running the spring series and myself and the family love going to them. Here is a brief review of the 3 courses…

For me, the toughest of the three spring courses. Mostly because, in March, you can expect a substantial amount of mud! But also because of the consistent undulations of the course. No killer hills as such, it’s just the feeling that you are never on the flat! Also, it can be tricky underfoot as much of the course is slightly off the beaten Lakeland tracks, so grip can be an exhausting issue. This latter point is also the charm of the venue though. As a less frequently visited corner of the lakes, many of the views are new and unexpected. And Cartmel racecourse and village – stunning! 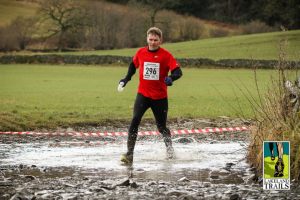 Only raced once due to a cancellation last year, the ‘Coffin Trail’ gets its name from a brute of a climb from the shores of Windermere back over towards Hawkshead. The 17k course begins with a slightly less severe version in the opposite direction. Apart from these two climbs, however, there is quite a bit of fast trail running to be had. Just make sure you save some energy for the ‘coffin’ climb or… (insert the coffin based punchline of your choice here – I haven’t the heart!)

Brought forward in the calendar this year to accommodate the Ultra, Staveley can often be attritional in terms of summer heat. Named the ‘Sting in the Tail’ for it’s short, but sharp, final climb up onto Reston Scar looking down on the village, I think the name is very deceptive! Really it should be called the ‘Chuffing Big Sting in the Middle’! The race begins with a dangerous 3 to 4k road climb towards Kentmere – dangerous in the sense that I reckon most of the field sets off way too quick. (Or at least I do!) On my debut in this race in 2013, a sweltering day, I burned all my bridges on that first climb and suffered as I rarely have before or since for the rest of the course. This is a crucial mistake as the real challenge of the route comes bang on halfway with a never-ending farm track climb over a series of morale-sapping false summits onto the opposite side of the valley. In 2014 I used my negative 2013 experience to my advantage, pacing myself to the foot of the climb and roaring up it as everyone else faltered, eventually finishing in 17th, my best Lakeland Trail finish to date. Sure, be mentally ready for the ‘Sting’, but the finish line is seemingly one decent triple jump from its summit! It’s the sting in the middle you have to watch… 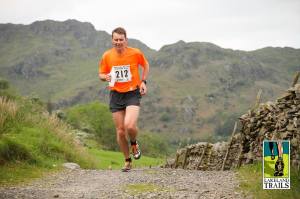 Climbing another killer false summit of the ‘Chuffing Big Sting in the Middle’! Chasing down the top 20… (Staveley 2014)

In summary, get yourself along to a Lakeland Trail. Leanne, my wife, has finally taken the plunge after supporting me for two years and will be making her debut in the 10k at Hawkshead. She is nervous but I’m not – I know she will love it! And the best bit of the whole Lakeland Trail experience? Leanne will run in the morning, the kids will run at dinnertime, and I’ll run in the afternoon – no babysitters required; all participating; all enjoying a great family day out in the Lakes – can you beat that?

And so to this year’s race. Hopes were high pre-race, mostly ego-boosted by the above-mentioned 17th place finish at Staveley last year and knowing I was in better shape this year. Thus I positioned myself on the start line in a top 30ish place, thinking I was now some sort of elite fell runner. Oh, the folly…

The first surprise was the relatively dry conditions underfoot. Where was the carpet of sludge from previous years? This, combined with my arrogance, is probably what lead to a 6m 15s first mile, which in turn led to an all-too-swift climb up the only real continuous hill of the course (miles 2 and 3) which left me in an enviable position of approximately 15th place on course, and an unenviable position of being totally spent with 8 miles to go! Humble pie was then consumed for the remainder of the course as I was steadily passed by the same runners I had just sprinted past up the hill, all passing with the smug look of “Oh dear, set off a bit quick did we?!” looks on their faces!

To be fair, if you told me pre-race I’d finish 29th, covering the 11.25 miles in 1hr 26m 50s, I would have been very happy. But it’s always frustrating to know that you haven’t stuck to your pre-race plan. It really is so much more satisfying to be feeling good, overtaking in the 2nd half of a race than to be knackered and being tagged by other runners. 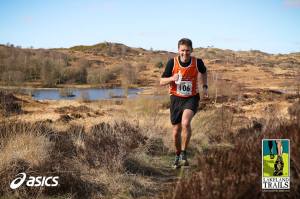 Cartmel 2015. Absolutely goosed just over halfway! You can always count of James Kirby, the official photographer, to be hidden away at the most tiring point of the course!

But any feelings of frustration at my performance were more than alleviated by the Lakeland Trails experience. My daughters, aged 7 and 3, had a great day out in the fresh air and countryside, my in-laws were visiting Cartmel for the first time and thought it was delightful, and Leanne was inspired to enter her first Lakeland Trail on our return home. And that, ultimately, is what it’s all about isn’t it? Without the support of our loved ones the running would be guilt-ridden and joyless, but if we can all participate together then that, in the words of an advertising campaign, really is priceless.